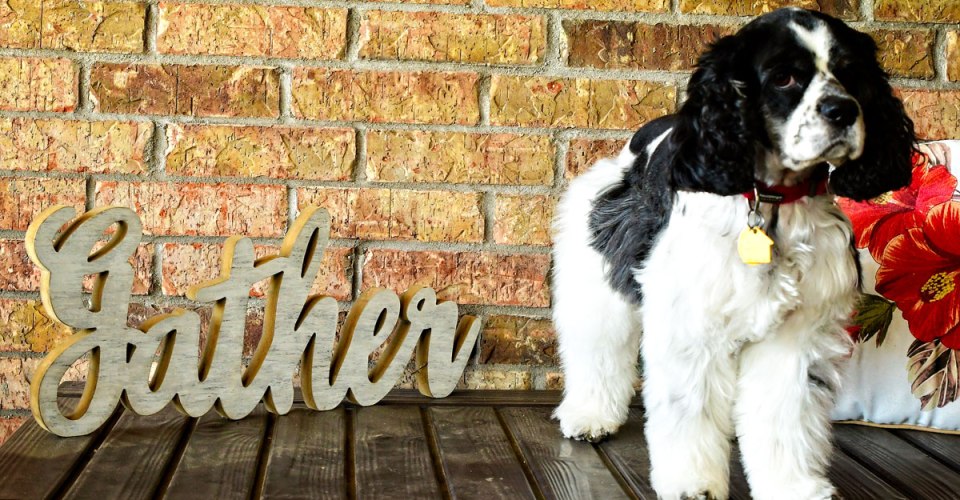 Aww Monday – Before & After

Last week I posted the image above of Lucy, our American Cocker Spaniel. Not long afterward, Lucy made the trip to her groomer for a new summer look.

“Lucile” is now rockin’ her new “Summer Doo”! It’s shorter all the way around and more of a puppy cut, even though Lucy is a three-yar-old young lady. She seems to like the cooler cut for those dog days of summer.

Eight years ago the two older granddaughters wanted their bedroom decorated in Shabby Chic style, so Nana took the early American student desk that I had in junior high and chalk painted it, distressed it, and made a slip cover for the chair to the left of the frame. We painted the room a sunny yellow and added crisp white curtains. It looked great.

Fast forward eight years. The oldest granddaughter is now married and the middle granddaughter will soon begin her second year in college. This year she will be out of the dorm and into an apartment. She has decided to take the old student desk and a matching small chest with her, but she would prefer a more country casual style to the shabby look of previous years. So, I brought the desk home, stripped all of the paint and most of the varnish off, then painted the desk a light cool grey and put a matte finish clear acrylic on the top. I think it’s going to be a winner.

I wonder what it will look like eight years from now?

This week at 4M is a free choice week. Since last week’s theme that required songs starting with the letter J was so much fun, I almost continued that train of thought into this week. Then I started listening to a couple of other songs on YouTube that I thought were worth bringing to the party. This will probably be a mixture of old and new artists along with some familiar and not so familiar songs. My first choice comes from two music legends, but the song my not be one that you know well and sing along whenever you hear it. I am a fan of 90’s country music. That decade gave us Garth Brooks, Trisha Yearwood, Travis Tritt, Leroy Parnell, Martina McBride, Shania Twain, and Vince Gill just to name a few. Vince Gill is a superb tenor vocalist and a legendary guitar player. The song I have selected to start this party is a duet featuring Vince and music icon James Taylor singing a song written by Sweet Baby James. Enjoy.

Another Oklahoma artist that found success in the 90’s was Toby Keith. Toby was the reincarnation of the outlaw sound that Waylon, Willie, and the boys of the 70’s made popular. “I Shoulda Been a Cowboy” is still one of my favorite country songs. A little more mellow sound is found in the tune “I Wish I Didn’t Know Now”.

The 90’s produced a multitude of bands with a country sound. The southern rock/country sound was dominated by Alabama. Country music is filled with odes to love lost and one the hits from this groups songbook that you don’t hear much these days is “Old Flame”.

I guess that I was wrong about one thing, there are no new artists or songs in this playlist. Let’s close this session with my all time favorite female country artist, Mrs. Garth Brooks, better known as Trisha Yearwood. I always thought she was the best female vocalist since Linda Ronstadt and you can hear Linda all over this song. Have a blessed week.